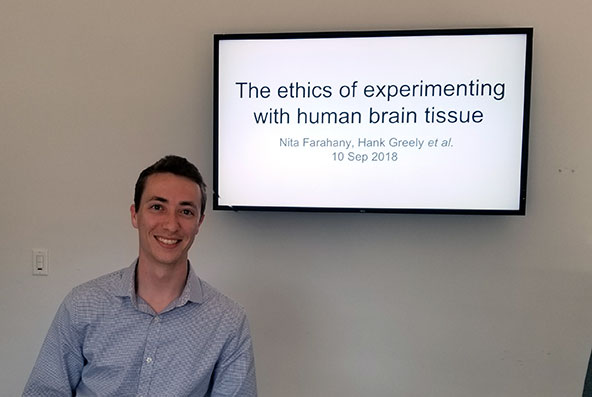 Galen Dods, from the el-Samad lab, presented a journal club on ethical challenges as well as the ethical importance of novel research on human brain model systems, including brain organoids, ex vivo brain tissue, and human-animal chimeras (e.g., human organoids transplanted into rodent brains). Galen’s presentation was structured around a recent Nature comment, “The Ethics of Experimenting with Human Brain Tissue” by Farahany et al, supplemented by Galen’s own background research on more recent advances in synthetic biology. Focusing particularly on brain organoids, we discussed recent scientific discoveries about Zika virus and autism facilitated by these systems, as well as current limitations of these systems (e.g., vascularization, reproducibility, neuronal-glial interactions, and features such as dendritic spines).

In discussion, we considered issues raised by the authors (metrics for sentience, human-animal blurring, death, consent, etc.)– some of these issues struck us as salient and others as remote. As in many new areas in neuroethics, public responses to research developments will likely be colored by science fiction and pop-cultural conceptions of brains in vats and scientific monsters. We also pondered the extent to which “purity” objections to human-animal chimeras reflect a commitment to species boundaries as opposed to a special interest in the distinctness of the human species; for instance, would mouse-pig neural chimeras elicit the same concerns? In future meetings, we hope to explore concerns that bioethics and neuroethics reflect a narrow and largely Western-influenced set of ethical preoccupations.