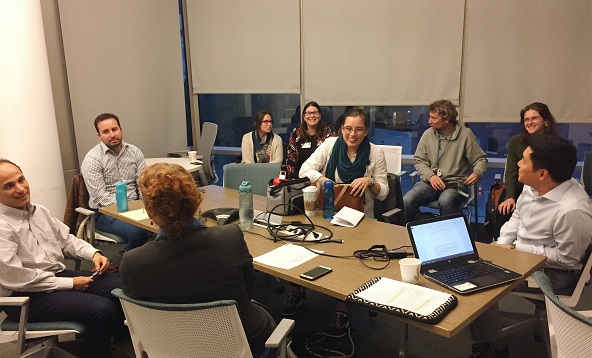 Today we hosted an interdisciplinary conversation led by Dan Dohan, a sociologist of medicine, and Kate Rankin, a neuropsychologist and researcher of socioemotional function in the brain. We considered links as well as gaps between the traditional social sciences (such as sociology, anthropology, political science and economics) and the growing field of social neuroscience, examining different discipinary perspectives on a recent review in social neuroscience, “The Emerging Social Neuroscience of Justice Motivation” by Jean Decety and Keith J. Yoder.

Dan observed that social scientists and social neuroscientists, despite their shared interest in social phenomena, are largely interested in two very different aspects: social neuroscience being concerned primarily with workings “inside the head” and the social sciences being concerned primarily with interactions among people. Furthermore, some of the lines of evidence considered in the paper (such as behaviors of macaques and cleaner fish, or the expectations of infants) may have mechanistic relevance for describing the evolutionary or developmental origins of prosocial motivation, but are not straightforwardly applicable to political or cultural understandings of justice. We also considered the worry that different terms may be used for different referents in different contexts, as well as more general transdisciplinary tensions over issues like funding and recognition. In addition, in reviewing the history of other domains in which cognitive neuroscience has been applied to examine behaviors originally addressed in other fields (e.g., neuroeconomics, the neurobiology of language, and the neuroscience of moral reasoning), we noted that cognitive neuroscience has often built upon and borrowed from explanatory frameworks developed in older disciplines without radically altering how those original fields (e.g., economics, linguistics, moral theory) conduct their work.